The Midtown Farm in Tucson, Arizona, is an offshoot of the Flowers & Bullets Collective in the Barrio Centro neighborhood. Tito Romero and Jacob Robles, friends since childhood and now in their early 30s, launched the organization in 2012 to provide healthy food alternatives, to improve their neighborhood, and to share their Latino and Indigenous cultures. “The idea of growing food, being sustainable, has been a trend for some time in predominantly White, middle-class communities,” Robles says. “For communities in the barrio, communities of color, those trends don’t reach us as easily.”

The friends spent about five years planting gardens and installing rainwater harvesting systems in people’s backyards before they and other members of the collective began leasing a 4-acre portion of their closed former elementary school to grow crops and build a sense of community. Where the friends, as youngsters, used to kick around a soccer ball and dangle from monkey bars, they now harvest fruits and vegetables, raise goats and chickens, and put on gardening workshops for their neighbors.

Although urban agriculture has a long history, Barrio Centro is part of a more recent movement to increase food security in underserved, largely ethnic communities while retaining or reclaiming cultural traditions and values that people can share and express through those spaces. In West Sacramento, California, the We Grow Urban Farm sits across from an elementary school in the low-income neighborhood of Broderick, where it serves local residents and seeks “to empower the next generation of farmers of color.” And in Chicago, the Urban Growers Collective, a Black- and women-led nonprofit, cultivates eight urban farms mostly on the South Side, where more than 76 percent of residents are Black.

Jacob Robles cures a clay comal with pickling lime during a recent Flowers & Bullets workshop on the process of grinding dry corn into nixtamal for masa, or dough, used to make tortillas. A comal is an ancient type of griddle used in Mexican cuisine. It is also used throughout Central and South America. (Photo by Alfonso Chavez.)

Barrio Centro sprawls next to a highway and sits directly beneath the flight path of Davis-Monthan Air Force Base. Aircraft noise led to the closure of Julia Keen Elementary in 2004, depriving residents of not just a school, but a vibrant neighborhood hub. “This school was extremely important for this community,” says Romero. “It was two meals a day for kids, it was after-school programming, it was youth sports, it was employment. It was a safe space.”

The farm is a way of restoring some of the lost community space, Romero says, adding that the goal is to someday buy more or all of the 9.5-acre campus to accommodate growth. He spends many mornings at the farm doing various chores. Like most of the collective’s dozen core members, he is a volunteer; Robles is one of three full-time employees. On a recent summer day, Romero was in the greenhouse spraying a natural pest repellent on dozens of plant seedlings that would later be transplanted into the ground. “We have some kale, some chard, some mustards, lettuce, broccoli,” he says, his voice trailing as the thunderous roar of a jet invades the greenhouse.

Long before the first seeds were planted, Romero says, he and his friends would often wonder at the possibility of developing their enterprise on the campus. “For years, we would drive by the school and say, ‘Damn, everything that we’re doing in the community, imagine that we could do it there.’”

What they were doing was selling T-shirts with culturally relevant artistic imagery, a venture that later would finance the first seeds of what would become the agriculture component of Flowers & Bullets. “We started with $500 and some T-shirts, meetings at the park, potlucks at each other’s homes,” Romero says. In time, one backyard garden led to another and another.

Favorable neighborhood reception to their projects motivated the group to organize around the need for a green space that residents could call their own, Robles says. They’d begun looking at their neighborhood through a different lens since taking an ethnic studies program in high school that encouraged activism and critical thinking from a Mexican-American perspective on such topics as socio-economic inequality. While the program stoked controversy and legal battles, it taught Romero and Robles that they could effect change within their own community.

“There’s a lot of families here, generational families, and people take a lot of pride in this community,” Robles says. “And there’s a lot of beauty in those things, but if I’m being completely real, there’s also a lot of struggle.” That duality is embodied in the name of the collective. “We like to say that flowers are the art, the beauty, the culture—and the bullets are kind of the struggle, the things we had to face in our community growing up, and the resistance to those things, like gang influence and drug abuse.”

Most of Barrio Centro’s residents are Latinos, many low-income. Their neighborhood isn’t blessed with the abundance of farmers’ markets or green spaces found in more affluent neighborhoods, but the collective set out to change that. In 2017, after submitting a project proposal for the farm concept to the Tucson Unified School District, the Flowers & Bullets Collective got the keys to the vacant school property.

By then, Dora Martinez, a member of the collective, had joined the nonprofit. Her previous work as a farm manager was crucial in developing the group’s sustainable agriculture program. In April 2018, the group received a $600,000 three-year grant from the University of Arizona’s Agnese Nelms Haury Program in Environment and Social Justice. It was a big boost for a project that sought not just to feed residents, but also to become a neighborhood resource that could offer educational workshops, jobs, and a sense of empowerment. 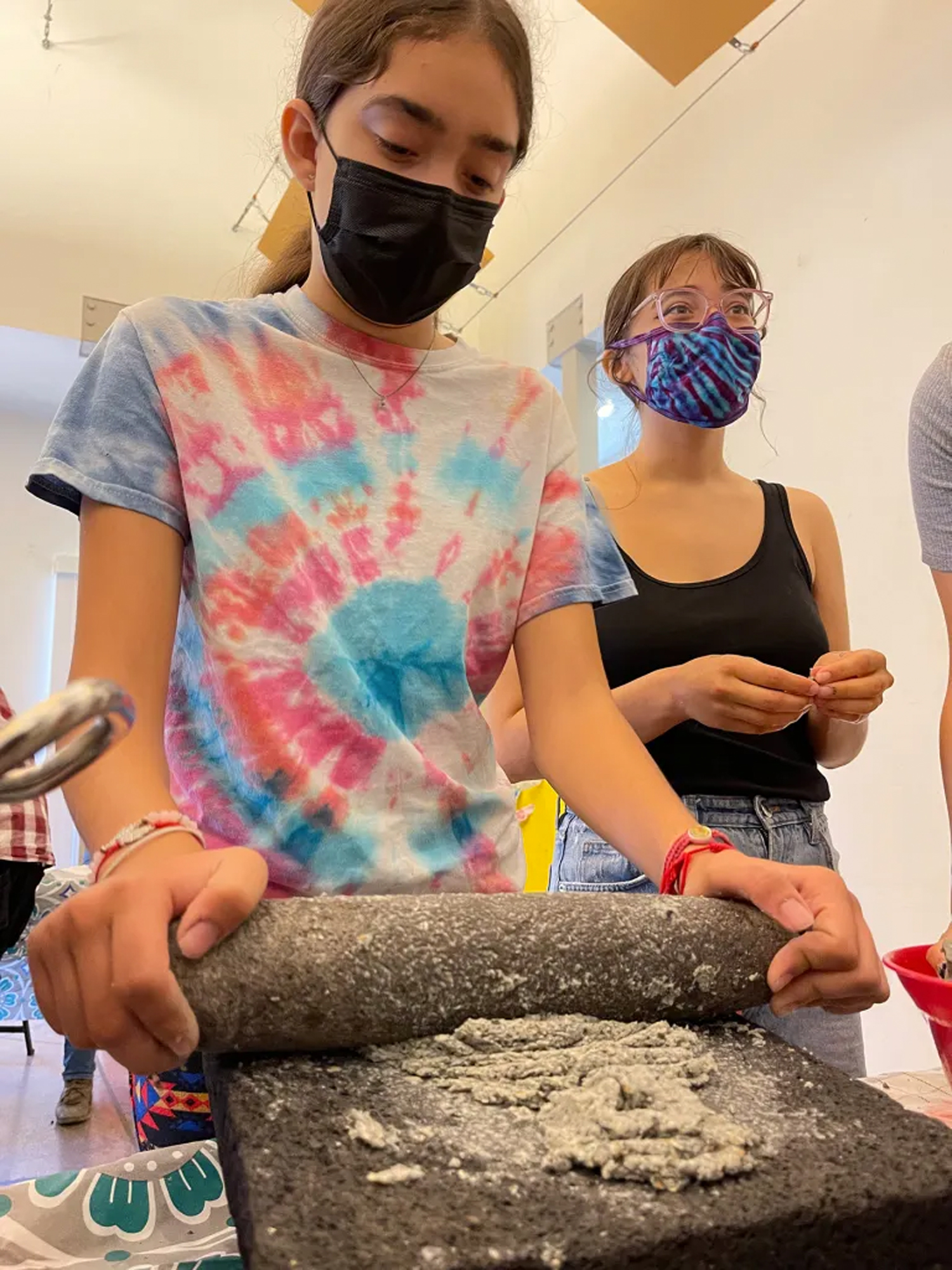 Itzel Gamez, 14, uses a metate, a grinding stone dating to pre-Hispanic Mesoamerica, to smooth out corn masa, or dough, for tortillas. She lives in the Barrio Centro neighborhood and with her brother, Daniel, participated in the Flowers & Bullets workshop. (Paloma Martinez is in the background). (Photo by Alfonso Chavez)

Existing programs at the farm and others being developed in concert with the community aim to get even more people involved and connected in the neighborhood. Although activities slowed when the coronavirus pandemic broke out, the farm became a drive-through destination where residents could obtain masks, hand sanitizer, and free seeds.

Flhip.com Finds Over 500 New Restaurants Opening Leads This Week Around the Country

‘Tis the Season for a Festive Holiday Feast from Dickey’s

Misunderstanding Salmon, Special Guest Cory Mintz and his new book The Next Supper, and a super episode of Trying Stuff with Sprague Soups

In this episode we talk about the latest research from the Dalhousie Agri-Food Analytics Lab and their Salmon Report, the potato crisis in PEI, updated on the Dairy Price Increase file, understanding the impacts to the food industry of the BC environmental crisis, and an exclusive opportunity for Sylvain to be on the other side of the mic with food critic, restaurant industry observer Cory Mintz all about his new book “The Next Supper: The End of Restaurants as We Knew Them, and What Comes After”.

If you liked what you heard you can follow us on Apple iTunes , Spotify or your favourite podcast platform, please rate and review, and be sure and recommend to a friend or colleague in the grocery, foodservice,  or restaurant industry.

Michael LeBlanc  is the Founder & President of M.E. LeBlanc & Company Inc and a Senior Advisor to Retail Council of Canada as part of his advisory and consulting practice.   He brings 25+ years of brand/retail/marketing & eCommerce leadership experience, and has been on the front lines of retail industry change for his entire career.  Michael is the producer and host of a network of leading podcasts including Canada’s top retail industry podcast,       The Voice of Retail, plus        Global E-Commerce Tech Talks  and       The Food Professor  with Dr. Sylvain Charlebois.  You can learn more about Michael       here  or on       LinkedIn.

Have a safe week everyone!