In western Maryland this March, the proverbial lion and lamb seemed to be running circles around each other. Instead of warming up gradually, the temperature rose and fell unpredictably. Warm sun alternated with freezing rain. In response, Ron Holter’s Jersey cows seemed to be clinging cautiously to their winter coats. A patchwork of fuzzy spots remained on top of their emerging summer hides, as they nursed a group of calves testing out wobbly legs.

Unlike most dairy cows, which are confined indoors, Holter’s spend all year living outside, where they develop winter coats for the colder months. As they move from one pasture to the next, they munch their way through abundant fescue, bluegrass, clovers, and chicory. When the grass is less productive, Holter supplements their diets with hay served in the fields. As the cows graze through a cycle of 66 paddocks, each separated by thin strips of electrical fencing, they leave behind chunks of manure to fertilize regrowth.

At this point, Holter says, it’s been about 20 years since the soil in his pastures has been bare. Over the decades he’s spent fine-tuning his grazing system, he has watched as diversity increased on the ground and in the surrounding environment and soil and water stopped running off the fields. Wearing a literal feather in his farm cap, he directs attention to the idyllic landscape and talks about how it contributes to the health of waterways and stores soil carbon using sweeping, energetic hand gestures. “By having roots that deep, we are pumping carbon down deep in the soil,” he says. “It’s just a thrill!”

Before he took over the farm, Holter’s father and grandfather grew corn and other crops in contour strips to feed a barnful of dairy cows there. But, in 1995, he took a class on rotational grazing, prayed about it, and decided to take his stewardship to the next level.

In the beginning, he made many mistakes. Twenty-five years later, some might see him as the godfather of regenerative grazing in the Mid-Atlantic. And now, various forces are converging to create opportunities for more farmers to follow in his footsteps, to scale up the practice in this region in a big way. 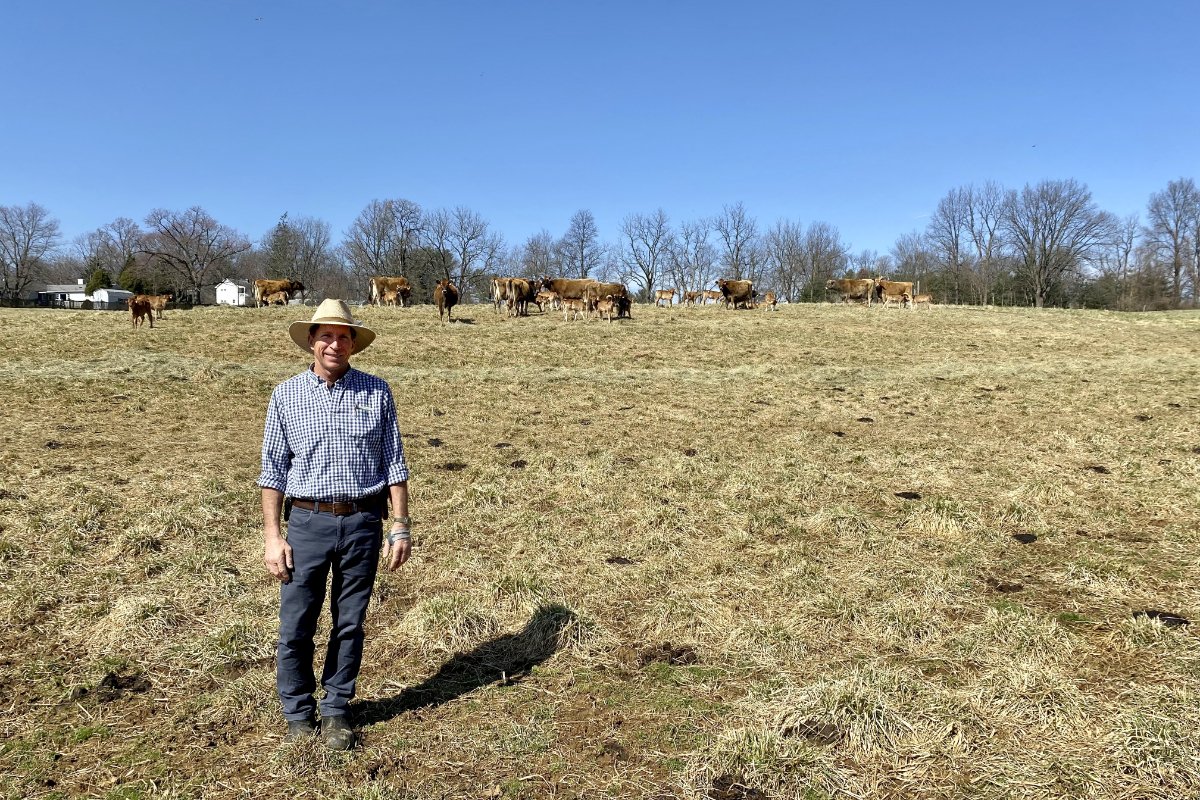 Some of the same organizations are also involved in the Million Acre Challenge, which aims to implement healthy soil techniques—with regenerative grazing at the top of the list—on 1 million acres in Maryland by 2030. That initiative also overlaps with Pasa Sustainable Agriculture’s Soil Health Benchmark Study, which is quantifying the benefits of soil health practices, including regenerative grazing, on farms in Pennsylvania and Maryland.

“Getting our farmers to help clean up the Bay actually has all these benefits for climate change and for the farmer’s bottom line.”

Most significantly, the Chesapeake Bay has long faced pollution from farm and urban runoff throughout its vast watershed, and many advocates and scientists see converting conventional dairies and commodity cropland to regenerative pasture-based farms as an important solution. As a part of its Watershed Implementation Plan under the Chesapeake Clean Water Blueprint, the state of Maryland is about half way to a 2025 goal of implementing rotational grazing on 19,500 acres. Pennsylvania has implemented it on 30,000 acres with a goal of 169,000.

The Chesapeake Bay Foundation (CBF) has been at the center of those efforts for years. In February, it released a report called “Farm Forward,” outlining how farms in the watershed can participate in improving water quality and mitigating climate change while also building economic resilience. And while the foundation included information on other practices—including buffers that farms plant along streams to prevent water pollution—it chose to zero in on the potential of regenerative grazing.

“We thought it would be a good time to highlight that . . . getting our farmers to help clean up the Bay actually has all these benefits for climate change and for the farmer’s bottom line,” said CBF Director of Science and Agricultural Policy Beth McGee. “There are so many dual benefits.”

CBF’s goal is to make a case for more funding for regenerative grazing at a time when the Biden administration is making promises around climate action and negotiations related to the next farm bill are beginning.

Of course, some climate activists advocate for a complete transition away from beef, since, along with lamb, its production results in higher greenhouse gas emissions than any other food. But groups like CBF and Pasa see grazing cattle in a very prescriptive way as one key component to building climate and economic resilience on farms while strengthening regional food systems. And they argue that it goes hand-in-hand with the overall reduction in meat eating that will be necessary to meet climate goals, as pasture-raised meat and dairy tends to cost consumers more.

The Case for Regenerative Grazing

The Chesapeake Bay has been impaired for decades, and while urban and suburban development contribute plenty of pollution, agriculture is now the largest source. In Maryland and Pennsylvania, nitrogen, phosphorus, and sediment move off commodity cropland used to grow feed for chicken and dairy CAFOs and into waterways that lead to the bay. Some of those excess nutrients come from manure from the same chicken and dairy CAFOs, which is spread on fields.

Grazing can eliminate the need for commodity crops grown for feed; it also spreads manure naturally, and keeps living plants in the ground at all times, trapping nutrients in place. But leaving a herd of cows outside in a field continuously will lead to a muddy mess. The key is extremely fine-tuned movement that allows pastures to rest and regrow in between visits from the animals. This approach also stimulates more growth in the plants’ roots, helping them draw carbon deeper into the soil. While there are endless variations and terms, that’s what differentiates regenerative grazing (also called rotational, managed, mob, and prescribed grazing) from continuous grazing.

Many experts see regenerative grazing as a key climate solution, citing research including studies done in the Midwest and on Will Harris’ White Oak Pastures in Georgia that show the practice can improve biodiversity and result in a reduced carbon footprint due to increased soil carbon sequestration.

But it’s a contentious topic on many fronts. Many argue trade-offs on land use negate some or all of those emissions savings. Others also question how much carbon can really be stored in the soil and for how long, based on factors like differences in soil type, when soil hits its carbon-carrying limit, and inevitable releases that may occur.

CBF’s Farm Forward report featured the results from six case studies its team completed on farms that converted commodity cropland or continuous grazing to regenerative grazing systems. They took soil measurements over a period of two years and gathered detailed information on each farm’s practices. Using models, the results showed nitrogen, phosphorus, and sediment runoff were respectively reduced by 63, 67, and 47 percent. The case studies also showed the farms that switched to grazing reduced their net greenhouse gas emissions by an average of 42 percent.

Restaurants Continue Opening Around the Country

In this episode, meet Paige Wolfe from Peace River Honey and their Hot Honey products!